Here are some frequently asked questions about the wild parrots found in Brooklyn. They are excerpted from my e-book (which you can read Free on Kindle).

What manner of bird is this?

The Monk Parakeet, also known as the Quaker Parrot, is an adaptable, hardy bird from South America noted for its intelligence, sociability, creative approach to nest-building, and general resourcefulness. They were first detected in the wild in New York City in the late 1960s, and continue to be seen around Brooklyn, Queens, the Bronx, and occasionally in Manhattan.

Quaker Parrots (whose official Latin name is Myiopsitta Monachus) are unusually capable of adapting to new environments. They’re the only kind of parrot that can build free-standing nests almost anywhere –- in cliffs, trees, power transmission poles, steeples, radio towers, and other human-made structures. This gives them a strong advantage in New York’s urban environment.

The parrots have been seen in numerous locations building nests in high light poles around grassy athletic fields. In the past ten years, many of these fields have been “upgraded” with artificial turf, which discourages birds.

For more than 40 years, the birds have survived on New York’s tough streets, weathering tornadoes, hurricanes, and a multitude of predators — both avian and human. Populations have come and gone in New York City, and this will likely recur as urban habitats change.

Monk parakeets are considered by some scientists to be an example of “charismatic megafauna” whose ability to charm humans helps keep them alive and viable as a species.

What do they eat?

Grass, leaf buds, nuts (they seem to have a particular yen for horse chestnuts and acorns), and occasionally, food left behind by humans. Myiopsitta Monachus can be observed eating pizza when given the opportunity in an area with a high “crust count.”

In New Jersey, monks have been observed eating seaweed.

The wild parrots in Brooklyn have a distinctive sound that takes some getting used to. Detractors have called them “the most raucous of birds” whose calls are akin to “a big fan blade badly needing oil.” Others find their Stockhausen-like chatter oddly musical. Both camps agree that myiopsitta monachus sounds like no other bird in New York.

When alarmed (say, by the sudden appearance of a hawk), whichever parrot happens to spot the threat will issue a strong, five or six “note” cry, which, if spelled phonetically, equals “Ack-ack-ack-ack-ack!” This cry, travelling at the speed of sound, instantly alerts the other parrots in the flock that an emergency condition exists. It can be heard for blocks!

When no emergency exists, the parrots’ chatter is much quieter, consisting of squawks, chirps, chortles, and other low-volume communications which, while not parsable by ordinary human beings, is known to convey information relevant to the birds.

How many of them are in Brooklyn?

There is no official census of wild parrots in New York City. The Audubon Society’s Christmas Bird Count takes place at a time when the parrots aren’t visible — many of them are “holed up and huddling” in their colonial nests, which may lower counts.

How many wild parrots are there in Brooklyn? My own estimates are about 40 birds at Brooklyn College, 60 at Green-Wood Cemetery, and perhaps another 50 in all of South Brooklyn (including Bay Ridge, Bensenhurst, Bath Beach, Manhattan Beach, and Canarsie).

Whether the population is increasing or decreasing on a borough-wide basis is also hard to know. A long-time resident of Midwood told me that the Brooklyn College parrot colony was very large in the 1980s (up to 200 birds). A few years ago, I counted 75 birds at Green-Wood Cemetery, but there seem fewer today. Populations ebb and flow in Brooklyn, due to the effect of wintertime nest removals (which certainly cause elevated mortality levels among the parrots), poaching, the citywide replacement of natural grass fields with artificial turf, and other factors.

One thing is for certain, however: the population of wild parrots in Brooklyn isn’t expanding quickly, belying the fears of New York State bird management officials in the 1970s who feared that Monk Parakeets were “the next Starling.”

What do the parrots want? 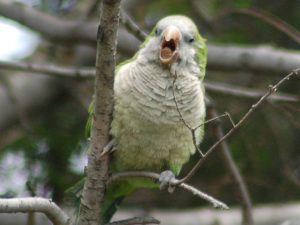 Like most creatures in New York City, the parrots primarily want to be left alone to enjoy a private “sphere of anarchy” carved into the stone jungle. Myiopsitta Monachus is a “sedentary” bird species, which means that once the parrots locate a neighborhood that meets their needs, they’ll hang around and make the best of it. The birds’ general attitude seems to be “if we’re causing a nuisance get over it.” While such an attitude might seem cavalier, it’s rare to find many living creatures in Brooklyn yn who doesn’t share it. 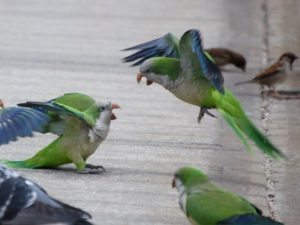 The short answer is that these birds are considered “potentially dangerous” in New Jersey but not in New York. Go figure.

Many have questioned whether the “potentially dangerous” classification is justified. While the birds have occasionally annoyed NJ residents by consuming their ornamental plants, and have caused nuisances for the local utility company, lumping them together with crocodiles, pit vipers and coral snakes seems extreme.

While the birds themselves aren’t dangerous, having one in your possession is. Monk Parakeets are illegal to possess in the Garden State. Violating the law means a $5,000 fine. If you’re doing serious research or rehab work, you can get a permit if you can meet NJ Fish and Wildlife’s stringent criteria.

How is their society structured?

A recent study by the National Institute for Mathematical and Biological Synthesis sheds light on the complex social world of Monk Parakeets. The study was based on observations of 29,776 Monk Parakeet (Myiopsitta Monachus) flocks. It is the first study to attempt to quantify complex parrot behavior using social network analysis. Here are some highlights from the study:

The study was carried out by E.A. Hobson, M. L. Avery, and T.F. Wright. It is important because “understanding the social systems of parrots is critical to understanding social processes such as vocal learning and the spread of behaviors. Many parrot species are now threatened or endangered, and increased understanding of how they structure their social interactions could improve our ability to manage these populations.”

How long do the parrots live? 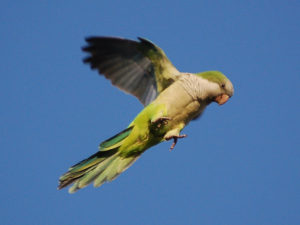 Monk Parakeets (AKA Quaker Parrots) can reportedly live until 40 in captivity. This is about mid-range in lifespan for parrots.

In the “mean streets” of American cities, lives might be shorter. Predators take their toll, and so do poachers. Unexpected nest removals in the middle of winter probably can have an impact on longevity. So can toxins in the environment. While shootings are rare, they have happened in Brooklyn as well.

Balancing the dangers of urban life is the fact that these parrots seem to lead very healthy lives. They are highly active all day, foraging, building, and flying, Overfeeding and lack of exercise can shorten a captive bird’s life — these wild parrots do not have this problem. So it is possible that there are still birds in Brookyn who are the children of the original escapees from JFK Airport in the 1960s.

Why do they build those crazy nests? 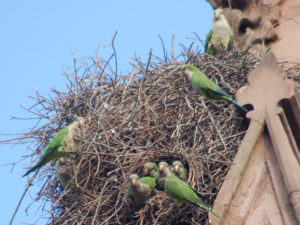 Monk Parakeets appear to be born with a powerful weaving instinct. This instinct expresses itself even with birds born in captivity: give them something to weave, and they’ll create a masterpiece.

These birds are capable of very precise work. Their small zygodactyl feet (2 toes front, 2 toes rear) lets them grip objects, cut them precisely, and move them into place.

These structures are built to last. Several years ago, a storm blew down a Monk Parakeet nest from a high tree. The nest was completely intact where it had fallen, and no birds had been injured. It was as if a giant Brillo pad had landed. Hurricane Sandy, which devastated New York in 2012, had no effect on the parrots, nor did a Tornado which blew through Bay Ridge in 2007.

These parrots work very hard — from sunup to sunset if the need calls, building structures meant to be enduring. Nest-building and maintenance appears to be a family activity and young birds are encouraged to join in the construction tasks as early as possible. It is possible to gauge the age of a youngster on the basis of how well the young bird can sever twigs, move them into position, and weave the new material together with the old.

“Starter nests” large enough for one pair can be built in as little as two weeks. Larger nests represent years and years of hard work.

Is it really true that they co-habitate with Hawks, Owls, and other Avian Predators?

Yes. In fact, the first major monk parakeet colonial nest observed in Connecticut contained — in addition to several parrots — a Great Horned Owl. Currently (September 2021) a pair of American Kestrels appear to have taken up residence in used portions of the parrot nest at Green-Wood Cemetery. Starlings often move into underutilized/abandoned nests.

Where can I see them in New York City?

There are a number of Wild Parrot “hot spots” in Brooklyn. If you’re just starting out, I’d head to Green-Wood Cemetery, because the wild Monk Parakeet’s nests are very visible, and the birds generally hang around locally (they don’t like venturing far into Green-Wood because of patrolling hawks and other predators).

Until recently, Brooklyn College was another excellent place to see the parrots.  Unfortunately, the replacement of the original grass fields with artificial turf drove the parrots off campus to nearby Glenwood Avenue. While a viable, publicly viewable nest was there for many years, this nest is now defunct. It is not clear where the parrots went but they no longer appear to reside in the vicinity.

There are other colonies in Brooklyn that are worthy of inspection, including populations in Red Hook, Bay Ridge, Manhattan Beach, and Canarsie.  But many of these colonies in South Brooklyn have been under major stress in recent years, due to poaching, nest removals, and replacement of grass athletic fields with artificial turf.

There are also wild parrot populations in Queens, The Bronx, and in Edgewater, New Jersey, just across the Hudson River from Manhattan.

How about beyond New York City?

To Reach the Brooklyn Parrot Society