I’m a mass transit buff so of course I had to watch this new video.

Green body. Blue flight feathers. That strange 11-tail feather cluster. Yup — that’s our Brooklyn Parrot! (Of course, I don’t want to be provincial. It’s a Long Island Parrot if that’s how you want to think about things. In fact, one could argue that the parrots resided on Long Island before they moved to Brooklyn, at least in respect to the first bona fide sightings of them by John Bull were recorded there, not in Kings County).

Lots of other birds are featured on the window, including our much-derided pigeons, what appears to be a sparrow, a duck, and two indigenous songbirds. But it’s the parrot that stands out for me — one more sign that our wild parrots are finally getting a dollop of institutional support.

BTW I have no idea at which MTA/LIRR station this depiction of the Quaker occurs (other than it must be at one of the renovated stations along the new 3rd track). If you happen to know, please send an e-mail! 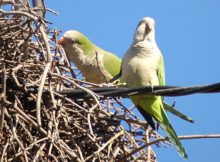 Unlike many of my friends and family, I’ve never visited Israel, but learning via the Jewish News Syndicate that these doughty birds have made a foothold there gives me an incentive to think about future travel plans to the region.

How established are the monks? According to a 2016 research article titled Unrelenting spread of the alien monk parakeet Myiopsitta monachus in Israel. Is it time to sound the alarm?, they began arriving in the mid 1990s and their population has grown to some 1,500 birds, with 87 urban nests located in the city of Tel Aviv, making Israel’s population of monks the second-largest in Europe and the Mediterranean Basin (Spain’s population of monks is approximately 20,000; by comparison, the total wild monk population in the entire U.S. is approximately 5,000 birds).

Unfortunately, as is so often the case with these wild parrots, the “alarm” referenced in the article’s title appears close to being sounded. The article notes that the Mediterranean Basin’s generally warm climate is close to perfect for the birds in terms of year-round food availability, and that lately the birds have been seen in more agricultural and semi-agricultural areas, which means that conflict with farmers seems almost inevitable in the future.

While it appears that no one in Israel is currently calling for any kind of lethal measures to be taken against the parrots (such as unfortunately happened in the U.S.A. back in the 1970s), any brewing parrot-farmer conflict runs the risk of escalating. Nor does the paper have any kind words for urban monks: “Most of the new alien populations appear in large cities, where they may not only cause damage in parks, gardens and orchards but can also damage human infrastructure, building their bulky communal nests on utility poles).They are also sometimes perceived as a new source of noise pollution.”

Fortunately, the research paper’s authors do not recommend that any rash steps be taken against the birds. Instead, they advise that that any actions be “cautious” and that, “building on the expertise gained from monk parakeet management programmes such as the ones carried out in the United States, we advocate that, especially in agricultural areas, cautious mitigation actions be urgently implemented in order to reduce population growth and range expansion rates.“

The report further recommends that “prior to implementing such campaigns, we would recommend conducting a feasibility study of the current situation that takes different aspects of biological invasions into account, including a cost-benefit analysis, an assessment of the feasibility of the measures proposed and a strategy for consulting and engaging public opinion, given that monk parakeets are often positively regarded by the citizens.”

Despite the above referenced report’s somewhat alarming title, I am encouraged its cautious tone and recommend that anyone interest in wild monk parakeets read it.

I’d also like to recommend that officials, in Israel, Spain, and in other places where the monks reside take a strong cue from New York City. While some have complained about the parrots over the years, others greatly appreciate them — including the local government. Back in the 2010s Birdie the monk parakeet became the symbolic face of “Green NYC,” a high-profile initiative of the NYC Mayor’s Office of Sustainability. Although Birdie was eventually retired as the Office’s official mascot, the Mayor’s Office remains interested in — and is highly protective of — the birds living within the City.

To many, the fact that there are wild parrots living in Brooklyn, the Bronx, Queens, Staten Island, and dozens of other improbable places is a small miracle; I’m sure that many folks in Tel Aviv and elsewhere in Israel feel the same way. Let us hope that any problems caused by the parrots can be resolved in the same spirit we find here in Brooklyn and in other places in America where the parrots have lived for a long time.